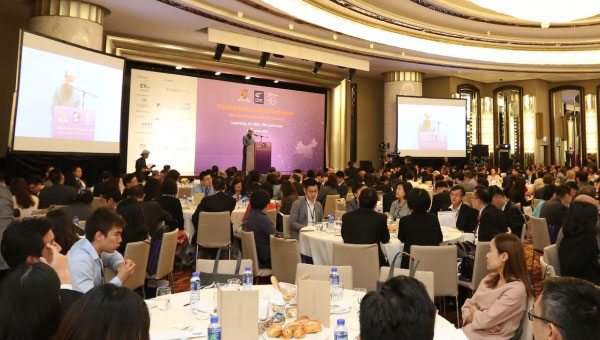 To mark the 50th anniversary of its internationally respected MBA programme, the Chinese University of Hong Kong (CUHK) Business School organised a special conference bringing together senior executives, academics, government officials and alumni to share their insights and perspectives. Focusing on the topic of “China Business in the Global Economy”, it was a chance to discuss the opportunities and challenges and consider what the next few years may hold.

Featuring a high-profile line-up of keynote speakers and panellists, the September 9 event drew an audience of more than 500 who learnt about latest trends and innovations in China’s emerging industries plus the broader challenges faced by a country still in transition. 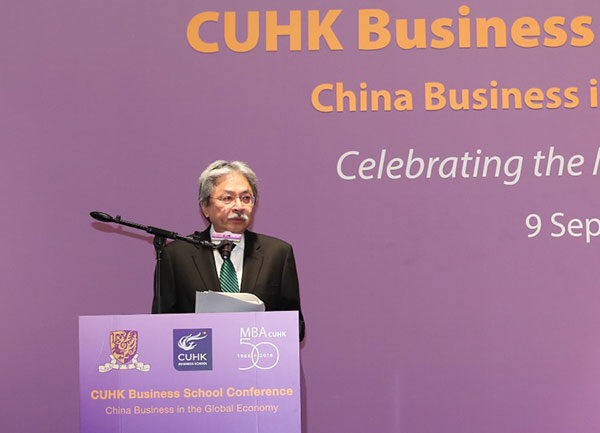 After noting that some 6,600 students from more than 40 countries have graduated from CUHK MBA programmes over the last 50 years, Financial Secretary John Tsang Chun-wah highlighted the significance of Hong Kong’s participation in the recent G20 summit in Hangzhou as part of the China delegation. He expressed his confidence in Hong Kong’s advantages and its ability to seize opportunities arising from the growth and development of the mainland economy. Indeed, more are likely to exist following the implementation of the visionary One Belt, One Road (OBOR) initiative. By making good use of Hong Kong’s strengths in finance, trade and logistics, as well as its skills in project management and high-end professional services, it should be possible to become a key hub for many aspects of the initiative.

Briefly outlining the history of CUHK Business School, CUHK Pro-Vice-Chancellor and Choh-Ming Li Professor of Marketing Michael Hui King-man, noted the pioneering role in introducing Hong Kong’s first full-time, two-year MBA in 1966. This was followed in 1977 by a three-year, part-time MBA and then an executive MBA programme in 1993. Today, the school offers 11 undergraduate and 13 postgraduate programmes, operates 10 research centres, and has about 32,000 alumni.

“We combine tradition with modernity, while teaching with a Chinese character to bring together China and the west,” Hui said. There are partnerships and collaborations with numerous organisations and institutions, including an MBA in finance launched jointly with Tsinghua University in Beijing in 2000. As part of the strategic plan, the goal now is to focus more on China’s global challenges and Hong Kong’s place in the development of new social, intellectual and economic advances. 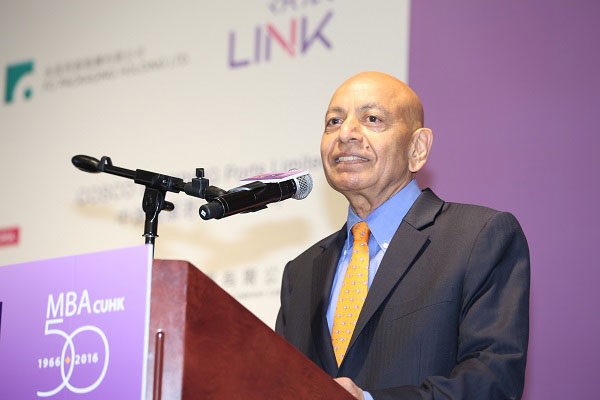 On the subject of “China Inc on the Global Stage”, keynote speaker Anil K. Gupta, professor of strategy, globalisation and entrepreneurship at the University of Maryland’s Robert H. Smith School of Business, said that overseas direct investments (ODI) by Chinese companies are now making an important contribution to the global economy. He noted, though, that headlines suggesting China is “buying up the world” are misleading. ODI by Chinese firms is still a relatively new trend and is far less than the investments made by American, Japanese or German companies. “If you look at the raw numbers, by the end of 2015 Chinese ODI was around US$850 billion compared to US ODI which is somewhere near US$ 7 trillion,” Gupta said. However, he predicted China will overtake Japan’s ODI in the next five years and Germany’s in 10 years.

The mainland’s One Belt, One Road initiative was a recurring topic throughout the conference. In his presentation, Hong Kong Trade Development Council (HKTDC) chairman Vincent Lo said many agreements have already been signed between China and countries intended to benefit from the scheme, proving it is about “real money, real projects and real jobs.” Lo said that Hong Kong is already a super connector for trade and commerce. By leveraging these strengths and attributes, HKSAR can play a key role in packaging large-scale OBOR projects and making them commercially viable.

In turn, Sir CK Chow, chairman of Hong Kong Exchanges and Clearing Limited (HKEX) said location is one aspect of attracting new listings by mainland and overseas companies, but quality is the major factor. “Our aim is to maintain a Hong Kong market where we can consolidate our unique strengths and where people from around the world feel comfortable listing and investing,” said Chow, an alumnus who received his MBA at CUHK Business School.

The panel discussions included one on “Tech Innovation in China”, with experts commenting on how mainland firms can differentiate themselves on the global stage. Another panel, on “New Trends in Financial Services”, explored China’s evolving online payment and settlement systems plus crowd funding, big data, peer-to-peer lending and new investment opportunities. 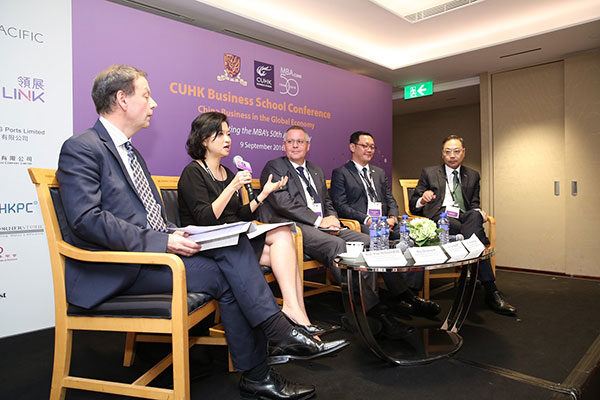 Reflecting on the day, Stephanie Villemagne, CUHK Business School’s MBA Programmes Director and Associate Dean of Graduate Programmes, concluded that the breadth and depth of the conference had offered an intensive learning. She hoped it had given all attendees plenty to think about.

The Power of Calling in Effective Talent Management

Any cookies that may not be particularly necessary for the website to function and is used specifically to collect user personal data via analytics, ads, other embedded contents are termed as non-necessary cookies. It is mandatory to procure user consent prior to running these cookies on your website.